Shut Down to Darkness *

I hesitate to share the following story! However being that it has been the underpinning of my reality for more than 6 decades affecting my worldview personally and artistically, I believe it needs to be stated as ground zero for this and future blogs. I again apologize to those I’ve hurt out of that reality. I’m incredibly grateful for the handful of rescuers who listened well, leaned into my reality during the last half of that sixth decade through to today enabling me to find freedom from the strictures of early childhood abuse.

The drowning of a child’s soul – my soul!

My parents made the choice to train for vocational ministry. We arrived at that place when I was three years of age and left just before my fourteenth birthday. From the time of our arrival and for the next eleven years, my parents relinquished their parental responsibilities to a proverbial institutional state. I became for all practical purposes a ward, which turned out to feel like a high-walled enclosure that was authoritarian and controlling. Under the dark cover of legalistic propriety there was a parallel universe of physical, sexual, emotional, and spiritual abuse.

Not everyone who lived there had the same experience, but this is my story.

A dyslexic child with an artistic bent, math was far from my strong suit. Grade 2 erupted volcanic as I attempted to please my teacher and do my best. This was not to be. Every simple arithmetic computation was a massive blur of hieroglyphic confusion. It was innocence that had arrived in Grade 2 bliss. My right brain lobe, however, swept imagination high, passing osmosis-like through lath and plaster walls upwards, where cumulous castles floated far off and wide. Dancing visual beauty consumed me instead of the proposed structured equations. My artistic bent held sway from earliest days!

My left brain, well, in full-out free fall, smashed hard against structured expectations and met the wrath of God himself – or so I was told!

All my mistakes were seen to be purposeful acts of defiance against this teacher personally, the institution, and of course, God, who apparently directed the place. She would insist that I stand up in front of the class and confess my ‘sin of disobedience and defiance’ for not doing the math correctly. She then would insist that every night after school that I be kept back to write on the blackboard 100 times my offences, then leave these until the next morning in an attempt to shame me into compliance.

This went on and on, day after day, month after month.

Finally in exasperation this Grade 2 teacher had enough of my ‘intransigence’ and let me know that the hour of judgement had finally come!

She called for full-fledged intervention!

I was marched out in front of my classmates to the second storey of the other school building next door and upstairs. The room was long and narrow, like a shoebox lying on its side, with twenty-foot ceilings and a small window high at one end. It was dark and menacing.

Nine teachers and a principal, like giant trolls, deep in scowls, snarling, circled tightly around me—this trembling six-year old. Their faces burned deep into my memory. Cult-like, they spewed hate and lies, accusing me of great sin. Cringing in recoil and trembling white, I wept while they mocked. There was no escape. They pressed tighter in tall concentric crush, one by one insisting I confess what I did not understand.

For my child’s ears, their words screamed horror: ‘No, you have pushed this teacher far too far. Extreme demands extreme! Repent to us, each in order, and repent to your creator God. Now! You must repent! You will be punished today by us, yes! But He waits and will punish you down the line to be sure. Just you wait! God doesn’t take kindly to prideful defiance!’

They waited, pushing me from one side to the other, forcing me to confess. Then, while the leering tight circle of female teachers watched, the male principal commanded, ‘Strip down your pants, boy.’ He took a fifteen-inch long black and red leather razor strap and lashed nakedness blue black. When it was over, they insisted I apologize again to each of them in turn, and that I pray again to let heaven and earth know that I understood my serious crime. They then reminded me that my ‘loving heavenly Father’ would be watching carefully to see if my transgressions were to continue.

Continue they did, as math eluded my right-slanted brain. For the next five years I daydreamed my cumulous castles floating far off and wide between ongoing variant abusive discipline—coming, ironically from people who purportedly believed as part of their foundational mandate, God’s love. They insisted the only way to resolve my unsuccessful turn at math—seen as defiance—was to break the will of this young wild heart.

At the end of the five years they succeeded. I cracked and broke! In uncontrolled hysteria, swinging between laughing and crying fits, back and forth, rolling on the floor, my muscles went into spasms of twitching and my head shook and jerked.

At this point, my parents, long preoccupied with their ‘ministry,’ recognized I needed help. They took me to a doctor eighty miles away, who recommended I be put to bed for rest. For the next two years, and unfortunately, alone in upstairs isolation of our home, I shut down completely! Drowning in dark escape, curled in fetal form, I often slept twenty-two of the twenty-four hours of each day.

Deep tendrils grasped my ankles, entwining and entombing me in blackness. I struggled to come to the surface but anchors cemented me into the blue-black waters of coma-edged reality. A distant pinprick light mocked its relief from high above. Disembodied voices came, but mostly went. Gasping for air, I thrashed to find surface’s breath that would give relief. I clawed my way out of the semiconscious depths to take short respites for food and water, and then slip back again into canyons’ deep recesses. I was alone, adrift in and below the high seas of an ongoing death grip and no one was searching for the person overboard.

And so my conundrum and anger began. I felt abandoned by indifferent parents, never sensing what it was to receive a parent’s tender reassurance. I was bewildered by and even embittered with a brand of institutional Christianity modeling a different message than my parents verbalized. Confusion reigned! Eventually a man body emerged, tied up tightly, stored high in the attic’s soul where it remained numbed and frozen, hidden in darkness for decades to come.

I began to identify many things in the broader scope of Christianity that have been done in Jesus’ name, both despicable and devastating. For a long time, I failed to see much that is representative of His character of love and grace and His vast creative nature.

My personal quest however, is to shift the paradigm in this ‘my little tide pool’ by presenting beauty, hope, and truth. I wish to point not to the past, rehearsing harsh rhetoric spoken in his name, but rather redirect my focus to the present where the master of all artists—and my good shepherd who came seeking a very lost sheep far out on a dangerous cliffside—continues to restore me.

*Excerpt from ‘Radiance Through the Rain’

Just a Feather on the Lane

Earlier this Autumn in walk’s attempt to keep body and soul intact as shadows lengthen and days grow short, I glanced askance and there it lay…this blue black wonder of flight…a feather lost of neighbour jay…

Now, one may see or pass without a second thought but in its immediacy it demanded that I stoop to consider…

I’ve been a designer/artist for five plus decades…I’ve studied well my craft and worked the midnight oil years over…yet in all my attempts where my hand invades canvas, nothing comes close to what demanded my attention this evening upon the lane…

Sure, with great care it may have been possible to replicate a facsimile of sort on canvas stretched, but not one that carried and oozed life in full out dimension…an intricate part of floating, swooping, raucous exuberance itself…it sang out as myriad versions daily sing, that intricate design exudes each centimetre square if only we would stop to smell and see.

It sadly also reminded me of fallen brevity and the curse of death. Life itself was originally conceived to be a sweep of raucous joy and full-out delight, but the fall of a blue, black feather reminds me of my days, and each action to choose well.

Many of you may think my mind facile in giving credence to the possibility of design that transcends human knowledge. To me it is mystery worth pondering deep that a very intelligent designer’s hand and indeed spoken word here, and not just random unguided happen-chance that had passed this way…and with this, at least for me, the palette of life and hope seems much richer again tonight with this fallen work of art. 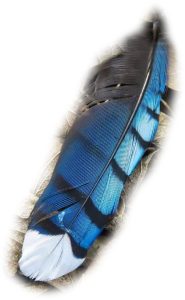